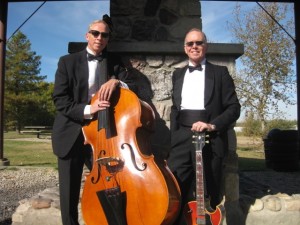 Besides being a pianist I also manage a jazz duo, “The Duo” that specializes in providing ambient music for cocktail hours for wedding receptions, fundraisers or corporate events! Below is their description. Full website located at: http://dongreg.theaudiocoalition.com/wordpress/

Don Ehret was born in Edmonton, Alberta on October 14, 1953. After spending the first six and a half years in Edmonton, the Ehret family moved to Ardrossan, a short drive east of Edmonton. He started on clarinet and then saxophone but switched to bass at age 13 which he played in a band made up of him and his 4 siblings. Two years later, he focused  his efforts on playing guitar.

After graduation, at the age of 19, he studied at the Berklee College of Music in Boston, and upon his return to Edmonton began playing sessions for the C.B.C., ITV, and concerts with such artists as Nana Mouskouri, Jim Nabors, and Carol Lawrence, as well as playing regularly with various bands.

Ehret has also been active in the academic arena as a music educator. He has been teaching at MacEwan University’s Alberta College Conservatory of Music in Edmonton since 1981.

Greg grew up in a musical family, being the youngest of four children (all who play instruments) and the product of musical parents, he has been exposed to music all of his life. Greg began his formal training at the age of 5 on piano, taking up trombone at age 12 and violin shortly thereafter.

At 17 he began playing trombone professionally and has been a member of the Edmonton Musicians’ Association since 1975. As a freelance professional trombonist Greg has played all styles of music ranging from classical to jazz and almost everything in between, small ensemble groups to big bands, and orchestras to travelling shows.

As well as working as a professional musician, Greg has a B. Ed degree from the University of Alberta specializing in secondary music and science, and taught school for a number of years in the Edmonton area. While attending the U of A he was exposed to the string bass and it was the start of a long love affair with the instrument. (He has always wished he had known this earlier when he was trying to learn to play violin and guitar.)

As a professional bass player Greg has played all styles of music, but naturally gravitated  to smaller ensembles that facilitate more creative opportunities.

Don and Greg played together in a big band in the late 70′s and became reacquainted in the early 2000′s.  The musical chemistry, passion and mutual respect was immediately noticeable and they have been working together as a duo ever since.